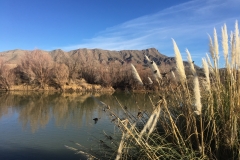 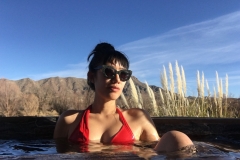 This is a former minnow fishery turned youth hostel turned worldwide spa destination in the small but quaintly named town of Truth or Consequences, New Mexico. This town is located on top of several hot springs and so many hotels in the area have a soaking pool, including some hotels like Blackstone Hotsprings which provides a mineral bath directly pumped to your room??? Amazing. But of course I didn’t get my shit together to look at reservations until a week before. Some of these hotels fill up 1-3 months in advance, especially for weekend dates! So definitely something to think about when you’re passing through.

Most of the hotels offer day soaks though, and Riverbend Hot Springs is probably the best bet because there are six pools looking out onto the Rio Grande river. I went on a beautiful afternoon that wasn’t too cold or too hot and spent the entire afternoon looking at birds on the river as the sun set over the Rio Grande. It’s basically like birding for people who don’t want to get up early. Some of the pools are lukewarm and there are two pools that are around 102-106 degrees, which I’ve realized is the temperature that heats up my core and keeps me warm even after I get out of the tub, it basically makes me feel invincible in winter. There’s also a fun barrel shaped sauna that seats 4 max (can I get one for my future back yard?) and a lounge area with hammocks. The minnow pool does not actually have minnows eating away at you, sadly.

I had this moment where I was reflecting on feeling my body and I realized that I wasn’t feeling my body because my history with eating disorders had been triggered that week, and I reflected on how hard it is for me to feel from inside of my body, still. I realized that I don’t know if I feel often from inside of my body, and as I thought about returning to LA, the land of juice cleanses and hot yoga, I wondered about whether or not I have ever had a relationship with my body that wasn’t based in punishment. I felt my body in the pool through feeling the environment around me, through drinking in the sunlight and the mountains and the sound of the wind in the river grasses, and I had this hippie moment amidst the flute music (yes, for real) where I realized I was feeling my body from the outside in instead of the inside out, through my heightened sense of the land. And that probably contributes to why I feel so body dysmorphic in urban areas that have a violent relationship to the land.

I do think the entry fee is too pricey – they charge per hour and it’s $15 per hour and additional to rent towels and robe. Listen, if I ran a spa, ahem, I would charge for a range of time, like up to 4 hours? Otherwise you’re hanging out there in the pool eying the clock waiting to get your money’s worth which is not at all my idea of a relaxing time.

Truth or Consequences is also located two hours away from White Sands National Monument, which blew my freaking mind. I emerged from the drive/hike through powdery white dunes so delirious that I spent way too much money in the gift shop. There’s a man named George who raises camels nearby and he comes on Sundays mid-day and takes them around the Alkali Flats, in case you wanted to hang out with a camel.

There, I just planned your next romantic getaway for you, you’re welcome?