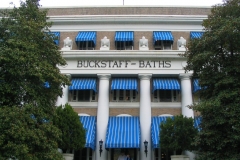 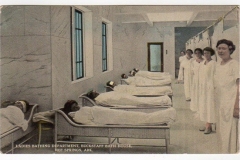 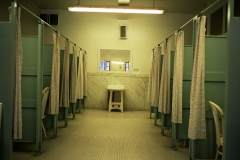 There’s a hot springs that runs through the eponymously named Hot Springs, Arkansas. It’s a really unique place. In different parts of town people bring their glass jars and fill it up with hot mineral water to drink at home. So there are people waiting in line and everyone is smiling. There are multiple spas located in Hot Springs National Park. I think the other spas have pools, this one redirects the mineral water into bathtubs that are located in their own individual partitioned-off space in a larger room.

Learning how to feel my emotions and my breath in my body has been part of my daily practice. I had a stressful few months and felt like I needed a physical reset. My AirBnB host told me that this was the oldest bathhouse in the country and it hasn’t changed since it was built, and I was intrigued by the set up.

They are only open 2 times a day, and there’s usually a long line down the block. This is because there’s a set number of baths and each person gets their own attendant. You go in and it looks like an old public school. You go up in an old cranky elevator to get to the second floor and you have a locker station. The attendants had on nurses outfits, like scrubs. They wrap you in a bed sheet and it looks so old school. Be aware: it’s not a nice, fancy spa. Then they take you to the bath and a different attendant turns on this silver metal contraption that creates bubbles and shoots out the water right in your crotch area. The baths look like those clawfoot tubs. So for your modesty they lay a hand towel on you but because of the bubbles it just shoots everywhere. Because it’s pumped directly from the springs, it’s really hot.

I was there for twenty minutes. Twenty is the maximum. I think I was in there too long, the sign said fifteen minutes. My assumption is my attendant left me in there longer because I was younger than most of the crowd. I fainted and woke up on the floor on the cold tile. As much as I think that I’m aware of my body, that was a wake-up call that I’m not as present in my body and that I need to be much slower. The attendant was so tender. She checked in on me a lot and took me to the cool room. I felt very taken care of which is not something I feel about strangers even in a hospitality setting. She said that she had worked there for 15 years and she had worked in spas for 20 years.

Prior to that, there was a moment ten minutes in where I was finally present. My brain had been so loud and I was finally alive in my body. That lasted for about five minutes. The experience felt very solitary in a way that I don’t normally experience because there aren’t communal areas. There was probably another hour’s worth of baths after that like a cold bath, a steam thing, a hot thing, and possibly a needle shower, which I didn’t get to due to the fainting.