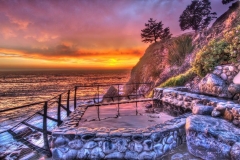 Esalen consists of sulphur springs overlooking the Pacific Ocean in Big Sur.  It was one of the first spas established by a hippie community, and was featured at the end of Mad Men when Don Draper goes on a retreat. It’s the quintessential hippie place. When I went there it was literally crunchy granola hippies (all white) tending the grounds. There were people from Israel visiting. Seems to be a lot of contradictions, right?

There’s cabins and gardens and open grass spaces. And you have to go down this long path and it goes down and there are stairs, it’s windy, and then the first part of the structure is a changing room, and there’s three different spring areas. In any spring you could fit probably 4-5 people. They’re very intimate. In between the springs are little clawfoot bathtubs next to each other where you can use a garden hose to fill your tub with the sulphur spring water. You can immediately smell the sulphur. The water is so silky. Apparently the sulphur is really good for you. It’s all naturally hot.

The springs are clothing optional. There’s also massage tables so you can get massages in that same area. The springs are open 24 hours, so we would be there in the middle of the night. It’s so dark at night. The last day I went out for the sunrise and it’s completely epic.

I was there for a tech retreat called Web of Change. I found out about it from another person in tech who does mindfulness. There was an Indigenous organizer at the tech conference and she invited a representative from the Esalen tribe to speak for the opening remarks. The name Esalen is an indigenous name. One of the things that has been going on for a long time is that the Esalen tribe has been trying to get them to stop using the name. Apparently it’s a very contested spot. It was an awesome but intense moment.

I was there after the 2016 election and it came at a time when progressive organizations were starting to examine their own racist practices. It made me think, what are we doing? We have these remote retreats at places that steal land and names from native people.

The retreat happened at a time when I was over organizations proclaiming to self reflect about racism. I missed a lot of the sessions because I was at the spa. That was a moment where it became more important for me to take care of myself than to make sure this progressive organization is actually living by their values. I was like, y’all can figure this out, I’ll be at the spa.