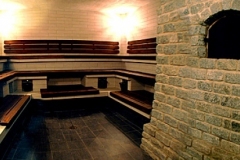 I ended up here for a bachelor party in 2010. Someone in the group knew about it. I had heard about Russian bathhouses and that’s why I wanted to go. This was my first time in a bathhouse.

Altogether it’s a very small place. They did a good job of maximizing the amount of space. You walk in, there’s a tiny cafeteria, there’s a bunch of locker rooms in the middle, flat screens, leather or pleather couches. It’s weird because wet dudes are sitting on pleather watching sports in the locker room area. There’s the area where there’s one sauna on each side and a cold plunge pool in the middle.

One of the saunas was dark and circular and it was stadium seating style, so it felt like you could fit a lot of people in there. It might be smaller than my current living room, but a little bit taller. The heat was something I had never experienced before. It was the real deal coal-heated sauna. At that time I had been going to saunas at gyms, and I liked them, but that one was like holy fuck this is hot. It was awesome because there were spigots, and you could pour out ice cold water in a wooden bucket and cool yourself off by pouring ice cold water on yourself when it was too hot.

They let you take the food and the beer into the saunas. Eastern European food, we had pierogies, pub-type yummy food. The beer was crisp and pilsner-like. We had these huge steins of beers, going back and forth with the beer, and when we got too hot we poured the ice cold water over ourselves.

The other sauna was smaller, the seating was on one side. That’s when they had the venik platza. I don’t know if it was a service but they had the tree branch bundles there and you could do them to yourself. So we were trying to do it to each other. The cold plunge was so cold.

That place was men’s only. It felt very Russian mafia. It seems like they may have rebranded since then, based on the website, making it more palatable to non Russians. At that time it felt like we were a bunch of art school hipsters encroaching on another space. There were some old Russian dudes and it was kind of uncomfortable.