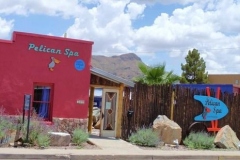 Someone told me there were hot springs in Truth or Consequences, and that there was a fancy one, and there were lots of cheapo ones. I was passing through on my way to El Paso and I thought, I can’t afford the real experience so I’m going to try one of these dive ones. I got to Pelican Spa. I was attracted by the style, it was very Palm Springs John Waters with a little bit of David Lynch in the middle of nowhere, New Mexico. I feel like some artist went to Palm Springs, became inspired, and created all these really weird paintings for the rooms. Everything is very garish, very very bright colors.

I had never been to Truth or Consequences before. I got there kind of late, around 10 at night. The office was closed and the person had to come out and let me in. I was the only person in the whole motel. It has a shared courtyard so you know if other people are there. I asked if there was anything open, anywhere I could get food. So I found a gas station, I got a six pack of Coronas. If you get a room you have 24 hour access to the spas. So the spas were open and nobody was there.

The spa area had a lot of hard angles. There are three or four little concrete rooms, and each room has a square concrete tub. Each of them has a changing room connected to the spa. There’s a massage table in the changing room I went into, for people who booked a massage. There was a faucet and you have to turn it on and fill up the tub. It feels like you’re in a prison cell. You’re in a gray concrete cell, the lighting is really harsh. The water was pretty good, otherwise it would have been fucking awful. I ended turning off the lights because there’s no way for it to feel chill in there. I started playing music on my phone, had my Coronas, filled up the tubs, and chilled. It definitely wasn’t the most lavish spa experience, but it was luxurious in its own way because no one was there.