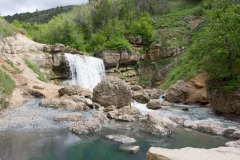 I was on a trip from Denver to Salt Lake City. There was this gorgeous storm lightning going through the Rocky Mountains. I end up in Salt Lake City and there’s this anarchist collective called Boing—this was 10 years ago, the first anarchist collective space in that city. They were kids who grew up in the Mormon church and rejected that and created a safe space, a very much queer space in radically oppressive city. There was a hot spring right outside the city that we went to that was really magical. We hiked up this mountain and went into this canyon and there were multiple pools. There was the quintessential naked old white dude Willie Nelson lookalike. The hike was not bad. It wasn’t super treacherous or anything. There is an area with a stream, so there’s a cool pool and a hot pool. It was very cold in some areas and super hot in some areas.