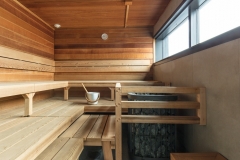 The last spa that I went to was in February 2019 in Uganda. I was living with one of my best friends who is an amazing DJ. We went to the spa. It was amazing bc the whole space was black women. The spa is Ugandan owned, whereas a lot of the businesses in Uganda are owned by Indians. We did a couples massage, so cute, I’ve never done that before. There was a shower in the room, and we could talk if we wanted to. It was really sweet. This person is one of the most amazing people I’ve ever met in my whole life. She’s incredible. That was really special and the most special spa visit that I’ve had—It is my only spa experience with another person.

I’ve never done a public bath. I want to. In DC Maryland, there’s this Turkish mosque, and at the bottom they have an all women’s gymnasium, and an all women’s swimming pool, and a Turkish bath. What I like about that is the relationality of it, which is the opposite neoliberalism where anything can be commodified. Having to have a conversation with someone. Smiling at someone.

The somatic aspect also connects to the emotional, psychological, and spiritual aspect. That’s something that I find lacking and that I want as a designer. What is the immaterial aspect that’s a part of this? We can talk about Western science and how this decreases stress levels, but I’m really into Reiki, which is something that has the somatic aspects and recognizes the energetic parts. I currently don’t find this coming together in spa spaces. The closest that I got to this was being together with my friend—there was this amorous relationship between two people who love each other. I felt emotionally safe and physically at ease.