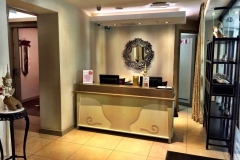 The best massage I’ve ever received is a Thai massage where they walk on your back. I was in Uganda, Nigeria, and South Africa a lot that year. I went to Johannesburg, there’s a place in Johannesburg called Sandton. I got a Thai massage there, the first that I’ve ever had in my life. This woman is walking across my back and cracking my back. By this time that I had been on so many planes, and I knew I was going back to Lagos to suffer, and I needed a back massage so that I didn’t fall ill. It really cheap—around $30/$40.

Because I grew up a very specific income class, I became fixated on art and design because I didn’t have access to it. I felt very self conscious about the house that I lived in. There’s a way that I feel like that little girl when I go into spa places. Spas usually have a very 2000s, early oughts aesthetic. Think PF Changs but spas. They are decorated with frosted glass doors that are appropriative of Asian culture. There’s something that I like about it. I like the organization. Most of the spas that I’ve been to, there’s a hallway, there’s loads of doors on the left and right, very Cartesian, nothing complicated or lived in about that space. For anxiety, it’s a relief to know where everything is. I don’t have to be a part of this community to figure out where to go.

It makes me think of hospitals. I’ve been in hospitals all over the world, and there are things that you take for granted with the sameness. That same trust that I have when I go to hospital that there are people are wearing white coats, IV drips, metal frames, is transferred over to spas. The association is the cleanliness. If I see a spa that has spa chairs, then I know that it is somewhere where I can relax. I see those massage tables, I know how to lay down on them, I see those chairs, I know how to sit in them.

When I think more deeply about it, what worries me is this globalized reality that we live in where we need to outsource our care. I lived in Northern England for 4 months in 2013—I didn’t know anyone there. I wasn’t close with the few people there. I went for months without people hugging me. Even thinking about it now I do feel aches that are in my body. If I were in the mindset of my past couple years, I would just go get a massage. Because that’s what I also use it for. Your body contracts when you don’t get hugs.